← The Ride of a Lifetime
Ok State vs. UTSA Preview → 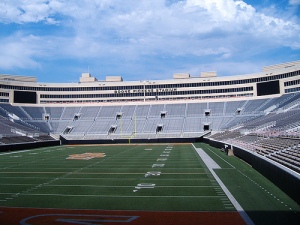 Boone Pickens Stadium will get rowdy this season as the Cowboys fight for another Big 12 title. (Photo courtesy of ensign_beedrill/flickr)

This is already turning into an exciting year in Stillwater with the Cowboys selected to win the Big 12 for the first time in history.  This shows how much respect the Cowboys have earned over the past few seasons, especially after only gaining 8 wins last season.  So let’s take a look at what this year has in store for the Cowboys.

On the offensive side of the ball, the biggest thing to look for will be the direction new coordinator, Mike Yurcich, takes the team.  This shouldn’t be a big change, as the Cowboys will still run an up-tempo, high-energy offense looking to produce big fireworks.  As for the QB battle, Gundy appears to be going with both Chelf and Walsh, playing to each of their strengths.  I think this was the best solution and should add for some unexpected tricks throughout the season.

But, the biggest factor for the Cowboy’s success this season will be the defense.  Glenn Spencer will add a new dimension to the defense, going with a more aggressive approach compared to Bill Young’s read and react.  If the defense can step it up and bring back memories of the 44 turnover season, this will be an electric year for the Cowboys.

Posted on 25 August 2013, in Cowboy Football, Sports. Bookmark the permalink. Leave a comment.

← The Ride of a Lifetime
Ok State vs. UTSA Preview →